No matter how much you like someone, you need to find out where you stand in his/her life before you commit to a relationship.

Wondering if you should walk away or stay?

It depends.  If you have just met a guy you really like, it takes time to get to know one another.  This is a situation where you stay.  But if you like the guy you’ve been seeing for a while and aren’t sure where you stand, it can be hard to know what to do.

When a guy is not letting you know where you stand or makes himself scarce in your life, it’s understandable to feel confused and frustrated.

If you’re with a guy like this, don’t place a high value on him and don’t put him on a pedestal.  His actions are telling you that you are not his priority so don’t keep asking him where you stand and where the relationship is going.

Hanging out and hooking up or being in an on-again, off-again situation won’t make him realize how much he wants you in his life.  And giving him an ultimatum may force an outcome that you may not be prepared for.  Instead of taking the above-mentioned actions and setting yourself up for disappointment and heartache, here are some considerations. 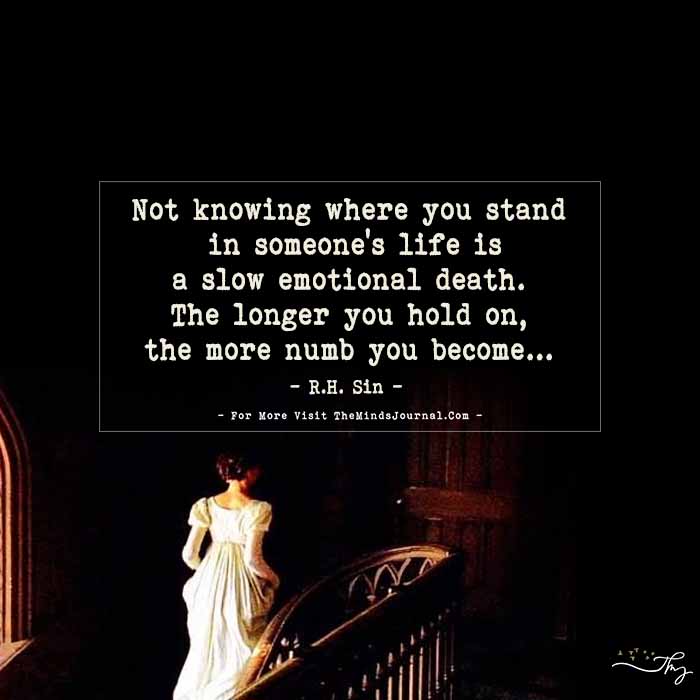 Depending on the situation you’re faced with, you will want to respond accordingly.

Situation 1: He doesn’t tell or show you where you stand

When a guy doesn’t tell or show you, he is keeping his options open because he is just not that into you.  He may want you for sex and not much more.  If you have sex with him, once the physical connection wears off, you will feel used and empty afterwards.

What you should do:

Many women stay with a guy hoping the sex will change his mind.  But in the process, they exude an energy of desperation and devalue themselves – reinforcing his desire to keep his options open.

A guy like this isn’t worth your time.  You’re better off cutting ties and being available to meet a man who will tell and show you where you stand.

Situation 2: He tells you he wants you yet shows you otherwise

When a guy tells you that he wants you in his life, and acts like he sometimes does and sometimes doesn’t, his actions are telling you that he isn’t able or willing to fully commit to taking your relationship to the next level.

While he may like you, he values his freedom more.  And if he still hasn’t healed from a previous relationship, there are issues for him to work through so that he can be ready for a new relationship.

What you should do:

Don’t try to do or be more in hopes that he will come around.  If you try to fix things about him and help him heal, you will most likely be disappointed.  He is on his own path in life with his own lessons to learn in his own time.  Let him go and learn his own lessons.